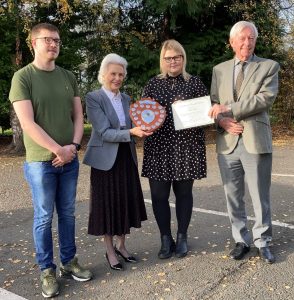 Following his death in March 2016 Sir David bequeathed a sum of money to the Crichton Foundation. The monies fund an annual prize to a student on the Campus. His wishes state an annual prize:

“will be given to the University student who is nominated for making an outstanding contribution to the Crichton Campus in the Dumfries and Galloway region.”

Academic staff at each of the Crichton Campus institutions are asked to nominate any student they feel has made such a contribution. The winner is then selected by the Crichton Foundation’s Awards Committee. The 2021 winner of this prize is Nikki Wells. Nikki first became know to the Foundation in 2019 when she was given a small emergency grant as a result of severe health problems. We are delighted that Nikki has made an excellent recovery and has been able to return to her studies.

The tutor who nominated Nikki has asked to remain anonymous. In nominating her they wrote “Nikki has demonstrated outstanding motivation and courage over the past two years in the face of extreme adversity, overcoming a life-threatening illness. Despite receiving a liver transplant, Nikki a mother and partner, returned from a short absence to her studies, against all the odds she completed her second year of mental health nursing, fulfilling her academic and clinical practice obligations to very high standards. This achievement is made even more incredible given the Covid 19 situation and Nikki’s ongoing personal involvement with various health professionals. Her plight was documented by the BBC in a short piece about her incredible resilience and zest for life. Never in all the time I have known Nikki have I heard her complain or feel any self-pity about her situation, yet she works tirelessly to improve the lives of other people, always putting their needs first. This is why I feel she is a very worthy candidate for the Landale Prize, Nikki is an inspiration.”