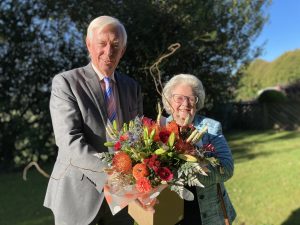 Evelyn qualified RGN at Dumfries and SCM at Glasgow Royal Maternity Hospital a year later. She had a distinguished career in nursing beginning in Dumfries and Galloway with time spent at the Royal Infirmary of Edinburgh and the Southern General in Glasgow in addition to her time at Rottenrow. She became Senior Nursing Officer for Newcastle Area Health Authority in 1973. She returned to Scotland as Divisional Nursing Officer for Lanarkshire Health Board in 1974, ultimately becoming Chief Area Nursing Officer and Director of Personnel and Manpower Planning before her retirement. During her time with Lanarkshire Health Board she oversaw the development and commissioning of Monklands Hospital. She was awarded an OBE for services to nursing in Scotland in the New Year’s Honours list in 1991.

Evelyn was awarded an Honorary fellowship of Bell College in March 2007 and is President of the Dumfries and Galloway Royal Infirmary Nurses League. From 1998 she served on the Board of Dumfries and Galloway College and in that role became an appointed Trustee for the Crichton Foundation at its inception in 2000. She has maintained a variety of roles within the Crichton Foundation having served on the Ball Committee as well as being an elected Trustee and latterly as chairperson of the Awards Committee and Vice-Convenor.

Convenor, Andrew Walls commented “there is a great deal that one might say about Evelyn and her somewhat bossy nature but there is one story that comes to mind. When she was senior Nursing Officer at the Southern General Hospital in Glasgow it was the time of the Ibrox disaster in January 1971. The hospital was going like a fair! The then Glasgow Lord Provost turned up in all his regalia insisting on a visit. Miss Hastings was having none of this in the middle of the chaos and he was told in no uncertain terms to leave and come back the next day. That’s Evelyn for you, she will stand no nonsense.”

Evelyn has decided that, for her the time is now right to withdraw from her formal roles at the Foundation. She has been a wonderful supporter of our cause. We are delighted that she has accepted an invitation from the Board of Trustees to become an Honorary Patron of the Crichton Foundation.