Early in 2019 a new slate sculpture was erected outside the University of Glasgow’s Rutherford/McCowan Building on Campus. The slate sculpture was designed and installed by father and daughter team Joe and Jenny Smith of Sculptural Slateworks based at Milton, Crocketford.

The sculpture was funded by four generous donations from Foundation supporters. With the funding secure the University of Glasgow were delighted to be able to commission this bespoke piece to mark their 20th Anniversary on Campus. It was officially unveiled at a small ceremony in February. 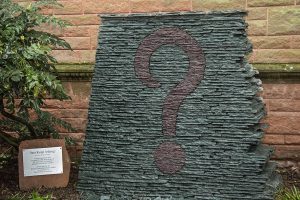