We attended the Crichton University Campus Student’s Association Fresher’s Fair in September. We were there to let students know about the funding available through the Foundation’s Awards schemes. On the day we ran a prize draw with a goody bag stuffed with groceries, goodies, a voucher generously donated by Farmfoods and copies of two books. In fact there was so much we had to use two bags as it wouldn’t all fit into one! The books included are A Widow’s Might by Rene Anderson, which describes Elizabeth Crichton’s fight to establish a university at the Crichton; a struggle she gave up after ten years establishing the Crichton Royal Hospital instead. The second book, Minister of Money, is the story of Mrs Crichton’s friend and supporter Henry Duncan, written by Charles Munn.

The lucky winner was University of Glasgow student Yanhui Zhuo. We finally caught up with Yanhui last week to hand over his prize. We hope he enjoys it! 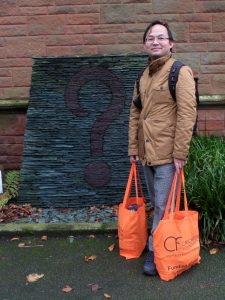