The Annual Crichton Foundation Lunch took place on Friday 15th November. This autumn event was established in 2018 in response to the many requests received for us to host an event equivalent to the Women of Dumfries and Galloway Lunch, to which men are also invited.

This year 190 guests gathered in Easterbrook Hall for a drinks reception. This was followed by the presentations of The Sir David Landale Prize to Scott O’Donnell and the Terry Prizes to Chloe Watson and Emma Watson. 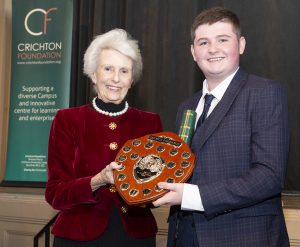 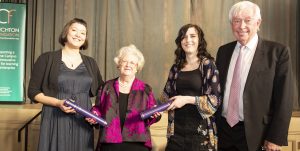 After a delicious two-course lunch guests then relaxed and enjoyed listening to our two guest speakers. The Right Honourable the Lord James Wallace of Tankerness gave a wonderful insight into his journey from Annan to the House of Lords, via local politics and the Scottish and Westminster Parliaments. Jim’s tales of the inner workings of the House of Lords were fascinating, who knew about the egg timers? Everyone then enjoyed listening to Sandra Thomson’s “jute journey” and how she has spent over 30 years trying, unsuccessfully, to close MacGregor Balfour, the company she suddenly became responsible for following the death of her father. Sandra’s stories of her trips to the mills in Kolkata and some of the less successful jute products were hilarious. 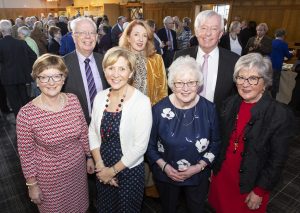 The Fundraising surplus of approximately £4700, will be used 100% to support the students and institution of the Crichton Campus. The Crichton Foundation would like to thank all of those who purchased tickets for the event, gave donations, bought an advert in the event programme, donated a gift for the prize draw or helped in any other way to support the Lunch.