There is a change to the speaker for our Crichton Conversation on Tuesday 22nd February. Regrettably, Judith McClure has had to withdraw from the event for personal reasons. In her place we are delighted to welcome

My China journey so far – and hopes for the future

Dave’s 37-year local government career as a Chartered Town Planner and economic development practitioner, focussed mainly on implementing development projects and supporting business growth in Angus. He was appointed Assistant CEO of Angus Council (2003) and in 2006 was made responsible for Trading Standards, Consumer Protection and Environmental Health as well as Economic Development. He served as national Chair of the Scottish Local Economic Development Group (2004) and Chair of the Business Gateway Scotland Board (2009).

In 1998 he established the “Angus-in-China initiative’ and twinning links with Yantai, Shandong Province (1999).  In 2008 he was made Honorary citizen of Yantai (Shandong PRC).  His lifelong ambition to build his own business enterprise; and passion for China led him to retire in 2012.

As SCC’s International Trade Ambassador (since 2016), he organised various visits & virtual trade missions for Scottish businesses. His personal commitment to developing the friendship link between Scotland and Shandong (2006) resulted in him being made an Honorary Citizen of Shandong Province in November last year.

In 2021 he registered “Valentine International Ltd” (UK) and “DXCEL & Valentine International Limited’ (Hong Kong) to focus on whisky, property investment and trade with mainland China.  As a shareholder and non-Executive director of “Zudu” Digital Media; and as an advisory board member of the Confucius Institute for Scotland’s Schools, he is looking forward to forging more trade, education, “people to people” and cultural links between Scotland and China. 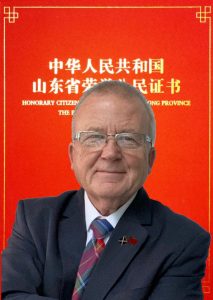